I drove into Round Rock for a regular visit with Micha. One of the first things I noticed in her living room was a shiny new electronic component prominently displayed atop her television.

She explained it was TiVo, a brand-new product called a digital video recorder (DVR) that recorded live television for later pausing, skipping, and sorting. I wasn’t too familiar with the technology, so Micha demonstrated its features. I witnessed responsive menus, heard addicting pings whenever options were selected, and I came away fairly unimpressed.

“You know,” I sighed, “that’s neat and all, but I already watch too much television as it is. A TiVo is the last thing I want or need.”

However, Micha’s life had changed as a result of TiVo, so she continued her effort to win me over. She told me how she doesn’t watch more television, but more shows, as she wastes less time by skipping through commercials. Everytime I rejected one of the DVR’s benefits, she fired back with a new feature I should consider. This tit-for-tat continued throughout the weekend.

Sunday came around, and along with it came the Super Bowl. That afternoon we drove to the home of Jay‘s boss Eric for a watching party.

Eric’s sprawling home stood high in the hills west of town. When we arrived, our host took us on a tour. Composed of Tuscan marble, Spanish tile, and Austin rock, the abode screamed Central Texas Mediterranean. The living room featured large bay glass windows, affording grand views of the little people dwelling in the foothills slums below. A never-ending staircase took up to the upper floors, and as we rose I caught glimpse of a side room downstairs. Inside I could see a young boy with a mop of blonde hair. Eric explained that was his son. The child was being supervised by a nanny who appeared to hail from the Pacific. If I didn’t already have money on the game, I would have bet she didn’t speak any English.

Upstairs, we were led into The Media Room, worthy of proper nounification because of its sheer manliness. The chamber was high and deep. Stadium seating on one side stood opposite of a bare white wall that begged to be bathed in the candy-color glow belched from the overhead projector. When informed this is where we would watch the game, all of us scrambled to call dibs on the best seats. I staked claim on the dead-middle seat and found out it was already occupied: sitting on the cushion was a wireless keyboard, or something akin to it.

It wasn’t quite your standard 101-keyboard: although it had a full QWERTY keyboard, an array of function keys and an elaborate tracking device took the place of the 10-digit pad. Eric took notice of my examination and slid over to explain the device. Taking it from my hand, he demonstrated its use. After some quick finger strokes, the lights dimmed, the projector burst alive, and surround sound echoed. Eric explained that each key had its own special function: one would churn through the 100-disc DVD changer, another would raise and lower the window blinds.

“And the coolest part,” he said, “is that you can use this thing to control the DVR, just like TiVo!” Those nearby in earshot snapped to attention at that part, their imaginations drooling in curiousity.

Eric’s wife called for him from downstairs. He handed me back the keyboard and excused himself.

Micha slid over with the shit grin that can only come from vindication. “See, even Eric has a TiVo!” she said, “All the cool kids have one. Don’t you want to be cool, too?”

She chipped away further at my defenses. “Dude, no one needs a DVR. It’s all about ‘want’. TiVo wants you — don’t you want it?”

The crowd around us begged me to listen to reason. “Once you go DVR, you never go back,” they yearned. But their Jedi Mind Tricks wouldn’t work on me, not this time!

Mercifully, the game started, and all attention was on the Panthers and Patriots instead of me. The first half passed quickly, with more action occurring during the commercial breaks than on the field. The headliners were Janet Jackson and Justin Timberlake, a pairing that had enough musical potential that we all felt possessed to watch. The two sang Janet’s current single “All for You“. This bled into a medley as “Rhythm Nation” started. The duet was then capped by the more-contemporary Timberlake single “Rock Your Body“.

The two strutted and posed alongside one another. And as the show came to an end, Justin foreshadowed the outcome with the lyric, “I’m gonna have you naked by the end of this song.” He reached out with his left hand and tore off part of Janet’s black leather bustier, revealing a patch of color that looked just like the rest of Janet’s skin. Then before anyone could process what just happened, CBS changed the view, first to display an aerial shot of the stadium, then to an immediate commercial break. 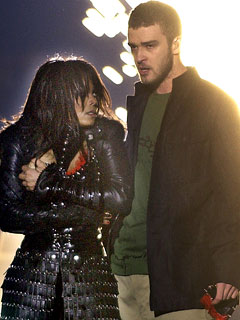 The room erupted into chaos. Shouts of “Dude!” and “Holy shit!” mixed with the occasional “No way!” filled the air. Suddenly, their screams were directed at me. “Dude! Dude! Rewind!” they pleaed. Suddenly it dawned on me. On my lap was the DVR-controlling keyboard. Everyone had to know if they just saw 38-year-old black boobie. I would be their savior.

I snapped to attention and scrambled to understand the controls. Eric had shown me everything but how to operate the DVR. So I pressed button after button until something happened. All of the other men in the room, who like me hadn’t read the instructions, offered their unsolicited advice on how to run the complicated machinery.

Finally, I discovered the right combination of keystokes, and before us was an echo of the recent past: the latter half of the concert was once again being broadcast. I tweaked the controls further, getting us near to “the moment”. Precise control was difficult, as I was just guessing how to run the DVR.

Finally, we got the image paused correctly, and a two-foot tit was frozen on the wall.

Then the room became quiet as we became aware of a foreign presence in the room.

Standing in the doorway was Eric’s son. He was rubbing his sleepy moist eyes, as he had just woken up in the middle of the night and was looking for mommy. As he blinked through the grogginess, he was attempting to focus on the weird image on the wall.

And everyone cheered in support.